The war in Ukraine continues with all the negative consequences for much of the world. However, acts of desertion and draft evasion also continue, which, if widespread, could lead to the end of the war. Anarchists from the Central European region are therefore publishing this call to organise active support for deserters. Wherever we live, let us make every other day a day of international working-class solidarity and resistance against the war. Let us organise in workplaces, schools and streets to strengthen the influence of desertions. Let us fight for dignified conditions for all who refuse to serve as a cannon fodder in the inter-imperialist war. 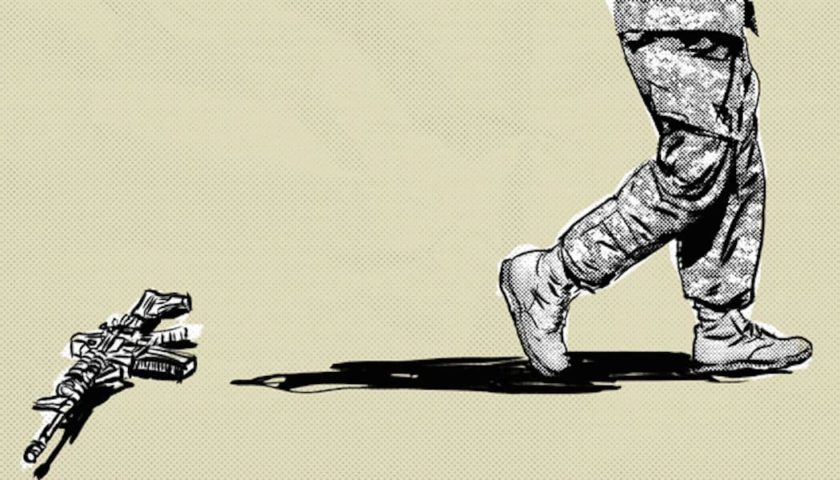 At least 200,000 people are fleeing Russia to escape Putin’s military mobilisation, and tens of thousands more are avoiding mobilisation in Ukraine. Yet some voices claim that “the number of deserters is so negligible that it is strange to even begin to talk about it.” These cynical attempts to “make invisible” people who choose not to serve in the army, to defect or to emigrate for political reasons, must be opposed. Their voices must be heard and practical help must be given.
Anti-war speeches do not yet have the subversive power needed to stop the war, which is why it is necessary to create conditions that make it easier for other people considering a desertion to move from reflection to action. It is not a question of standing on the front line between the tanks of both armies and thinking that this will make the soldiers lay down their arms. It is about achieving the conditions at the international level that ensure that deserters can safely defect and live in another country without a risk of prosecution and social stigmatisation.

At present, opponents of the war in Russia and Ukraine have almost nowhere to go. They are trapped between national borders by their ‘own’ governments, while neighbouring countries refuse to accept them and provide them with decent material conditions. If people’s choices remain limited to the options of ‘either being forced to serve in the army or face persecution’, we can hardly expect an increase in desertions. It is necessary to achieve the opening of borders not only for civilian refugees, but also for deserters from the armies on both sides of the war line. This is precisely what can significantly weaken the dynamics of war.

But this will never be done by negotiation with the various governments which are only the local minions of the world capital state, nor will it be done by a social-democratic call to “make concessions in the area of migration policy”. Our only weapon for us, the proletarians, is the class struggle, it is the mobilization in the streets, it is the sabotage of the economy, and it is the direct action against permanent war… It is then, and only then, that the frightened ruling class is forced to let go, which will never constitute for us the goal of the struggle but only a moment from which new offensives must be carried out against the whole of this world of misery and war…

After all, the proclamations of politicians criticising the aggression of the Russian army are an expression of hypocrisy whereas they refuse to share material conditions and resources with people who refuse to serve in the army. And besides, why and how would they act otherwise, these worthy representatives of the bourgeois order!? It is necessary to stand consistently against Putin’s aggressors, as well as against the statesmen of other countries who, through their own policies, allow the army to retain its war potential. It is the governments of the countries in which we live that effectively make it more difficult to desert, and thereby they contribute to the continuation of the war.

Those who are concerned about saving lives should be thinking about how to weaken the fighting capacity of armies, how to get soldiers off the front lines, how to get them to disobey, how to motivate them to use their weapons against those who force them to go to war. Let us think about this and organise direct actions that will turn these considerations into concrete results.

SOME ANARCHISTS FROM THE CENTRAL EUROPEAN REGION (NOVEMBER 2022)

English translation: The Friends Of The Class War